HOUSEKEEPING AND MONITORING IS A MUST 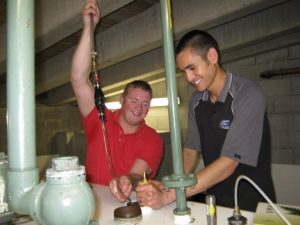 We are at the dawn of a new era. With the introduction of highly efficient engines, which offer both fuel economy and low emissions we now require a diesel fuel of equal quality. Unfortunately these days, stories regarding contaminated fuel supplies are becoming increasingly common. This contamination is the direct result of water ingress and/or condensation, which has led to the growth of organic material (microorganisms) in the fuel.

As most will know the bulk of New Zealand’s diesel fuel stock is produced here in NZ with the rest coming from imported supplies. While the quality and cleanliness of the fuel coming out of the refineries both here and overseas is very high, maintaining that quality right throughout the supply chain is another matter altogether. And by that I mean all fuel storage tanks and transfer systems right up until the product actually reaches your engine pumps and injectors. This issue not only affects the fuel suppliers, but also the fuel stored in and transferred from your vessel’s own tanks as well. 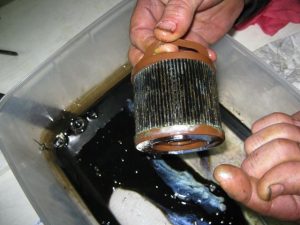 The process behind your fuel reticulation system receiving quality uncontaminated fuel is called GOOD HOUSEKEEPING. Good Housekeeping involves the monitoring of fuel condition by regular testing and draining off any Free Water present in the bottom of the tank. Treatment of the fuel or even draining and cleaning of the tanks is also part of this process if a microbial infection takes hold. Along with this Good Housekeeping quality filtration for the transfer of fuel should also be employed. From my understanding all fuel companies are required under their procedures to filter the fuel every time it is transferred from one storage system to another. You yourself should also have in place a good primary fuel filter water separator so that any contamination in your tanks is restricted from getting to the pumps and injectors. 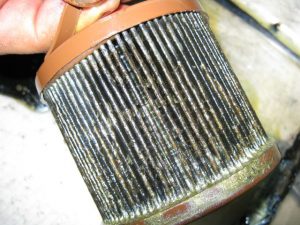 Microbiological contamination – DIESEL BUG, as most in the industry know it, is a combination of bacteria and fungi (moulds, including Hormoconis resinae, and yeasts) that grow in fuel tanks. A serious problem if you are unfortunate enough to get a bad dose of it. Microbial contamination blocks filters, causes loss of power, poor fuel economy, excessive wear to fuel pumps and injectors and can result in engines shutting down at the most inopportune time.

While the Aerobic Bacteria only grows in what is called Free Water at the bottom the Yeasts and other Fungi grow at the interface as well as throughout both the water and fuel phases. All microorganisms feed off the hydrocarbons in the fuel. What is not widely known however is that the only bug that sticks to the tank floor and walls is Hormoconis resinae (previously known as Cladosporium). The other microorganisms just float around in the fuel or at the interface. This H-res microorganism is also responsible for the damage that can occur in alloy and steel tanks, as it has the ability to drill down into the metal substrate and cause corrosion. However, a problem that is often seen when microbiological testing of the fuel is carried out is that there is no Hormoconis present in the results. This is because the Hormoconis is not a particularly strong microorganism. At the start of an infection it is one of the first to take hold, however as an infection grows other fungi like Yarrowia lypolitica (a common Yeast) take over the food source. This results in the Hormoconis dying out, leaving the dead material stuck to the tank floor with the damage obscured beneath. SRB’s (Sulphur Reducing Bacteria – Anaerobic Bacteria) also eat steel, but they are only found in long term storage tanks.

One of the main issues when large numbers of microorganisms are present in the fuel is that they not only hold water or moisture in suspension, but they can also actually produce it. In a lot of cases you will find, particularly with common rail engines that it is this water that causes most of the problems, as it can damage pumps and injectors if the correct filtration is not in place

A couple of points worth noting here is that the Government and fuel companies have now introduced Ultra- low Sulphur fuel. One of the draw backs is that this allows microbial growth, in particular bacteria to grow and prosper. High sulphur levels in the past have suppressed the bacteria thereby reducing the ability of other microorganisms to grow. While low sulphur fuel is not a requirement for diesel in marine use I suspect reintroducing it just for us would be very costly. Another issue of note is the introduction of Biofuels. With the added nutrients available the bugs will have a field day even if it is only cross contamination between fuels stored in similar tanks. With Biofuels good housekeeping is an absolute must.

On the monitoring front a new test kit call Fuelstat™ Marine will be available very soon that will give you a quick and accurate way of determining whether your fuel is suffering from microbial contamination, enabling treatment to be undertaken before it can cause damage. This innovative test takes ten minutes and gives a simple, easily interpreted result on the presence of microbial contamination and the level of the problem in your tanks. This kit was developed from the hugely successful Fuelstat™ resinae test kit already in use in the aviation industry. I have no doubts you will find it just as useful.